Dangal · May '18
Watch the complete making of Dangal - Indian cinema's biggest hit ever. Buzz
Dangal | Netflix
A once-promising wrestler pursues the gold medal he never won by training two of his daughters to compete at the Commonwealth Games.
netflix.com
Filmzoned by
Zeerak Aahir

Dangal · Jun '17
Remember the killer father-daughter wrestling match in Dangal? Watch Nitesh Tiwari do a shot-by-shot break-down of what went into filming the scene between Aamir Khan & Fatima Sana Sheikh.
Filmzoned by
Filmzoner

Dangal · Jan '17
Another brilliant fan poster of Dangal. Will be great if anyone can find out who made this!

Dangal · Dec '16
Superb Rangoli by Pankaj Patil, as a tribute for Dangal! Do tell us what you think of it..

Zeerak Aahir: This is brilliant art work. Only a film like Dangal can inspire such creativity! Kudos to the artist.

Dangal · Dec '16
Aamir Khan in an interview with Komal Nahta, where he talks in detail about how he chooses films, the importance of economics in filmmaking and how much does it matter for him, and a lot more! 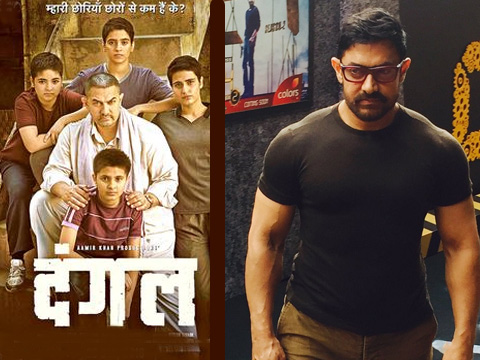 Dangal & Nil Battey Sannata, and what connects them

Among a lot of things I have been thinking and reading about after watching Dangal, there is the particular aspect of how justified is it for a parent to push their children towards something they may initially not be interested in. This reminded me of another film I saw ear.. morelier this year called Nil Battey Sannata, which too was about a parent, being insistent on an initially disinterested daughter, to become something in life.

In that film, the parent was a poor single mother who worked as a maid, and pushed her daughter hard towards studies against her will, so that she does not end up becoming a maid like herself. Also much like Mahavir Phogat's character in Dangal, she goes to great lengths herself to make that possible for her daughter, while the daughter was unappreciative of it(even rebellious much like the Phogat sisters in Dangal).

Anyways the interesting bit is that, Nil Battey Sannata was directed by Ashwini Iyer Tiwari, who is wife of Dangal's co-writer/director Nitesh Tiwari, who wrote this film's story as well, while they both collaborated with two other writers for the screenplay.

I urge everyone who has seen Dangal and has been wondering about these aspects to also watch Nil Battey Sannata. The comparison is interesting both in similarities and differences, in treatment of this particular aspect in both the films, and it will give you an added perspective to think about it, or say widen the range to reflect upon. I'll be for sure interested in reading a piece on it, if somebody does one, so just planting this thought out here.

Dangal · Dec '16
Dangal seems set to create history on Sunday and smash all box office records with the highest single day collections a Hindi film has ever recorded. Dangal is flirting with the 40 crore nett mark on Sunday and the target of the Hindi version will be that 39.32 crore nett r.. moreecord of Prem Ratan Dhan Payo.